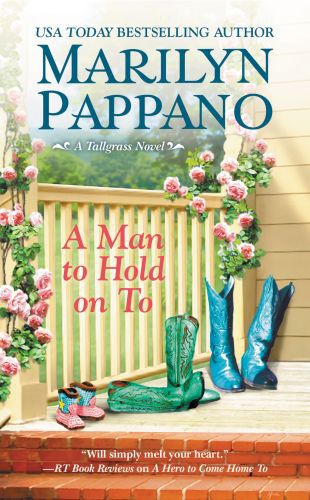 A Man to Hold on To

A Tallgrass Novel A MAN TO HOLD ON TO Therese Matheson doesn't know if she'll ever get over losing her husband in Afghanistan. Surviving Paul's death has been hard, but raising his sullen son and his thirteen-going-on-thirty daughter alone has been even harder. All they need is a fresh start, and Tallgrass, Oklahoma, could be the perfect new beginning . . . especially when Therese meets Sergeant Keegan Logan. The sexy combat medic and single dad soon awakens a desire she'd thought long buried.
Keegan always wanted to be a father . . . someday. So when his ex-girlfriend disappears, leaving her daughter in his care, Keegan's hands are tied. He has to find the girl's father. His search leads him to Tallgrass and to a beautiful brunette widow who has no idea her husband was ever unfaithful. What begins as a friendship soon ignites into something far more and gives him the courage to be the kind of man-and father-he always dreamt he could be. But his secret still stands between them. Can Keegan reveal the truth and convince Therese they share something too special to lose-a love that can bring two families together?
(95,000 words)