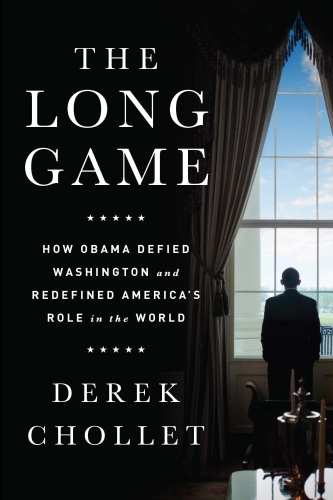 Authoritative and original, The Long Game is a controversial assessment of President Obama's foreign policy legacy. Too often, critical discussions concerning American foreign policy are divorced from the political reality in which leaders face choices and make decisions. Here, consummate White House insider Derek Chollet corrects common misperceptions to show how President Obama has done more to alter American foreign policy than any Democratic president since Kennedy.
Ten years after 9/11 and three years into his presidency, President Obama was ready to shelve the wars in Afghanistan and Iraq, and shift his foreign-policy focus to bolstering the power of America's presence in the international community. his foreign-policy strategy was to be founded on economic strength and global authority but history intruded. Instead, in the coming years, Syria disintegrated; ISIS emerged; Egypt, Ukraine, and post-Qaddafi Libya erupted. Russia has resurfaced as a military threat to Europe, and America has inexorably declined. The world order today is as complicated as it was at the end of the Cold War. President Obama is not to blame.
With new and surprising insights, Derek Chollet reveals that Obama has largely remained true to the policies he outlined before taking office: extracting US forces from Iraq and Afghanistan; deemphasizing military force as the primary tool of American power; rebalancing toward Asia; involving Congress into decisions about the use of force; and pursuing bold policy goals on issues like climate change, trade, and nuclear disarmament. Ultimately, Obama's policies at home and abroad have been restoring American power, not squandering it. And by redefining American foreign policy, Obama has defied official Washington. The Long Game boldly sums up the core tenets and names Obama's highly successful doctrine: to position the US to win “the long game."